We are back in Scotland for our next 'Meet the Producers' feature to meet Speyside Specialities, a family business offering “a Taste of Scotland”.

We are back in Scotland for our next ‘Meet the Producers’ feature to meet Speyside Specialities, a family business offering “a Taste of Scotland”.

Speyside Specialities, as it has been known since 1997, originated back in 1898 when Robert Lawson began a family business producing ‘puddings’ from an outhouse in Dunfermline, Fife. Four generations on, the business is owned and managed by David Lawson and is based in Buckie, Aberdeenshire on the North East Coast of Scotland.

David, Speyside Specialities is a long-running family business. Can you tell us a little about the origins and the history of the business and its current set up?

In 1898 Robert Lawson, a grain merchant from the Calton district in Glasgow, had fallen on hard times. He moved to Dunfermline in Fife with his wife and three children armed with some recipes of traditional Scottish meat products given to him by a sympathetic friend. He set about producing ‘puddings’ from an outhouse at his home, which he sold from a hand barrow to communities up and down the Fife coast. The business grew and gradually became a general provisions merchants at Castleblair.

In 1933 the third eldest son Frank Lawson acquired bacon-curing facilities off the Original Bacon Curing Company, which had gone bankrupt during the great depression. It was here that the business transferred in its entirety to Aberdeen Dyce. The business flourished after the cessation of hostilities of the Second World War and grew to becoming a respected household name. It wasn’t till the mid 60’s that the entire shareholding of the company was acquired by Unilever PLC.

Francis Lawson, Frank’s son, was appointed Chief Executive and ran the business till 1978 when he retired from the meat business. Not long after this Unilever closed the operation in Aberdeen. In 1997 Francis and his son [me] acquired the controlling interest in a meat manufacturing operation “Stewart of Buckie” thus re-entering into the meat industry. The name was changed to Speyside Specialities and has flourished since then continuing in the tradition of making traditional Scottish ‘puddings’! In 2009 I took on the full ownership and running of the company.

How important is it to you to maintain the family tradition and how does that impact the decision-making for the business?

Well we don’t wander about with a handbarrow full of our goods any more, however where as far as possible we have kept to our roots. Despite modernisation and new techniques the basic principles remain the same. In regards to decision-making I have a few rules that I always abide by: To produce the best quality products that we are able to. To be respectful to our customers and suppliers providing products of the highest quality at fair and competitive prices.

Your company maxim is “Try a Taste of Scotland”. Do you source all your ingredients locally? Is that an important factor in maintaining the family legacy?

If it is possible we will source our ingredients locally, however for certain ingredients this is just not possible. For example all our Oatmeal, which is a main ingredient in a lot of our products, comes from Grampian Oat Products just 30 minutes down the road. All our beef and lamb comes from the Grampian or Highland regions. However pepper just isn’t grown in Scotland. Being able to buy the majority of our ingredients from Scotland is an important factor to us as a company, we are proud to produce traditional Scottish produce for the Scottish market and beyond. If we say it’s Scottish then it has to be from Scotland.

Traditionally, Scottish Black Pudding includes beef suet and oatmeal. How true do you remain to the traditional and original family recipe?

The basic recipe remains the same using pigs blood, oatmeal, suet and spices, however this has been tweaked over the years to better the product. For example in years gone by we used fresh onion, but this produced a slight tartness to the flavour, which even changed throughout the year due to availability of fresh onion. Now we use a kibbled onion, which we reconstitute gaining consistency and giving slightly sweet flavour. 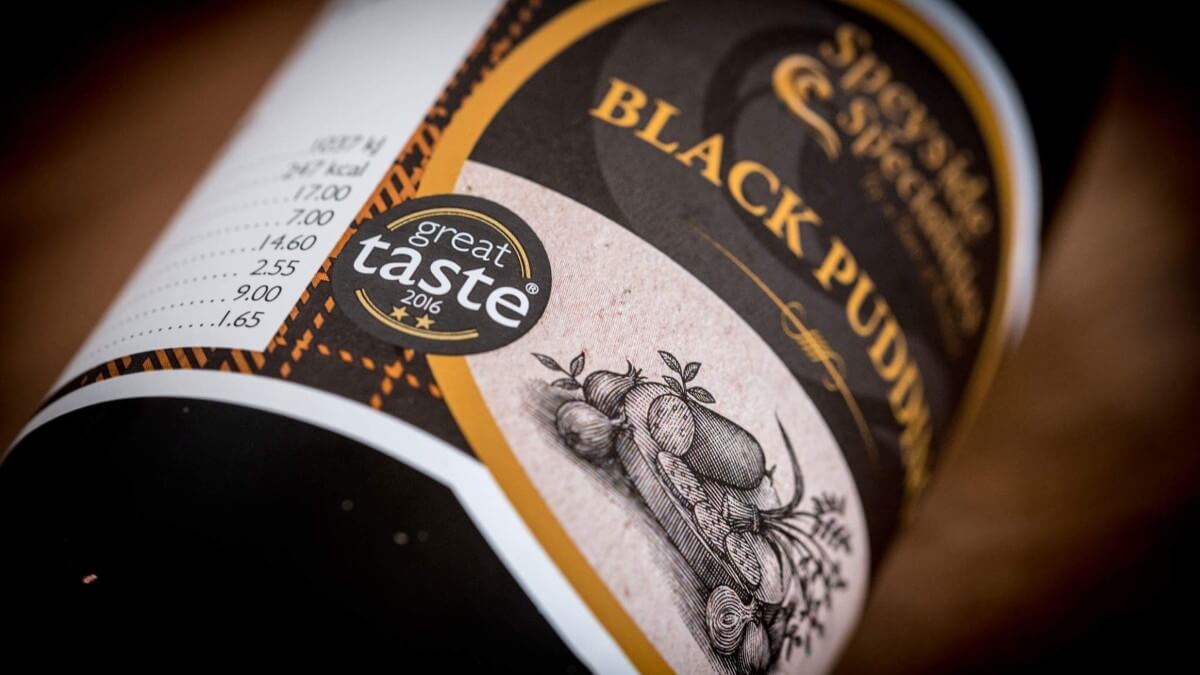 In the modern commercial environment, dehydrated blood tends to used in the production of Black Pudding. What is used in Speyside Specialities Black Pudding and why is this your choice?

Yes we do use dehydrated blood, Haemoglobin powder as it is now known. The reason for this is due to the amount of black pudding we make. The use of fresh pigs blood is a very labour and time consuming operation and if we were to factor this in then we would not be able to compete in the markets we are in. Due to the fact that we have a ‘Great Taste Award‘ winning product and now sell all over Scotland is a testament to how good our black pudding is. It may not be as traditional as we would like with using fresh blood but its pretty darn close.

As a producer of Black Pudding, you obviously have your ‘secret’ ingredients i.e. the spice mix! Is there any more you could tell us about what differentiates a Speyside Specialities Black Pudding from those of your competitors?

Yes, the main noticeable difference in our black pudding is that there are no visible lumps of fat. It has a soft, delicate, moist texture with a rich and dark visual appearance, exuding an earthy, peppery aroma. When eating there is a taste of oatmeal and a lovely hit of cloves and seasoning. A very moreish product!

You are also the largest producer of White Pudding in the UK. Could you tell us a little more about White Pudding and why is it so popular for you?

White pudding has been the core product of our business. It’s very much a North East of Scotland product, that has spread across the country as a firm favourite as an accompaniment to mince and tatties. It has a multiple of uses not just for mince, it can be cooked as an alternative to black pudding for breakfast, or even used as a stuffing for chicken or turkey. White pudding is basically oatmeal, suet, onion, salt and pepper. Last year we produced over 3 million individual white puddings.

What are the other products in the current product range, and do you have products in development that you are able to tell us about?

We also make Skirlie (oatmeal and onion stuffing), haggis, red puddings and burgers. We do have a new product about to enter into the market place – it’s a Chilli Black Pudding.

Tell us a little more about the Red Pudding. This appears to be unique to Scotland, is this correct?

Yes and no would be the simplest answer. Red pudding usually sells in fish and chip shops where it is battered and deep fat fried, however it is basically the same ingredient as Polony or as it’s known in England Saveloy.

Speyside Specialities have been awarded ‘Great Taste Award’ Stars for several products. How important is it, to you, to achieve food industry recognition of your product quality?

I could be quite controversial in answering this question, so let me just say that we choose carefully which industry recognition awards we enter into. We have ‘Great Taste Awards‘ for our Black pudding, Haggis, White Puddings and Stuffing. ‘The proof is in the pudding’

If people want to try some Speyside Specialities Black Pudding (or any of your product range), where can they buy from?

Our products are available across Scotland as we supply Tesco, Asda, Morrisons, Co-op and Aldi along with a number of wholesalers and food service companies.

And do you have any ‘famous’ clients, especially chefs?

I honestly don’t know if we supply any famous chefs, if we do it’s not directly from us but through a wholesaler or food service company.

Is it correct you also supply your Black Pudding to Buckingham Palace? [And is the Queen a fan?]

One of our most important customers is Donald Russell of Inverurie, an award winning and royal warrant holding online butcher. As we are their sole supplier for black pudding, haggis and white puddings, I have been told that some of our black pudding has been ordered by Buckingham palace. Whether or not the Queen has actually eaten it is unknown.

Finally, do you have a tip or favourite recipe / meal for preparing or cooking your Black Pudding?

My favourite recipe is Black Pudding and Scallops with a Cardamom and Orange Sauce.

The secret to cooking our black pudding is to fry it slow so it cooks thoroughly through, but giving it a slightly crispy outside. 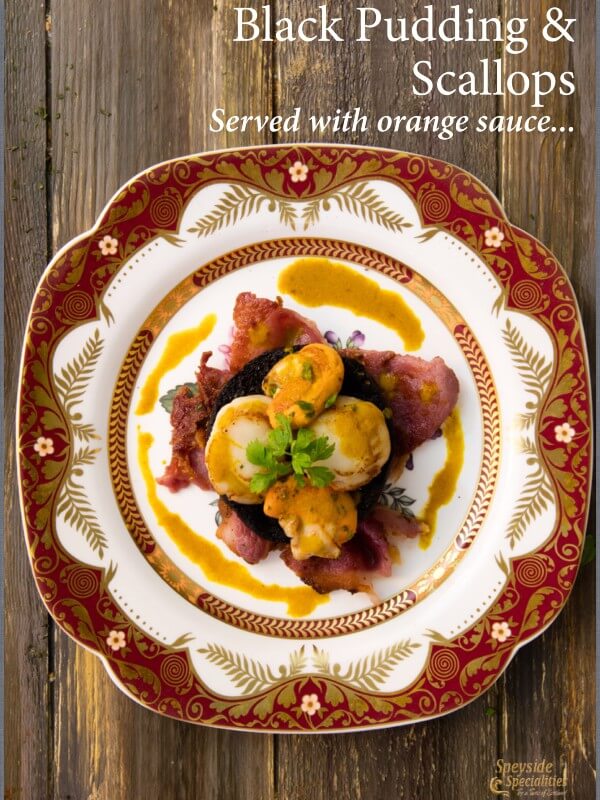 Thank you to David!

Updated Apr18: Our competition prize accompanying the article was won by Sam in Macclesfield.